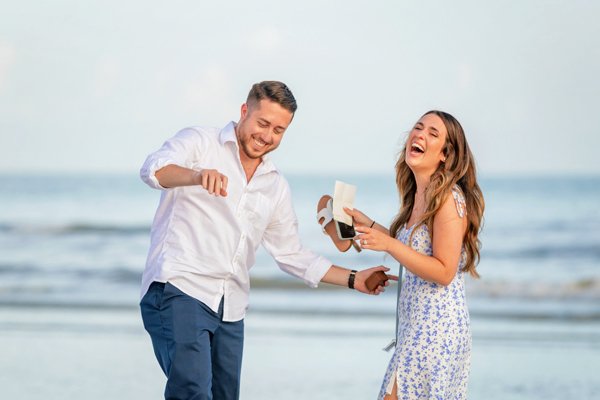 I received a call from Charles several weeks prior to his vacation on Sanibel. He was planning a surprise engagement to his girlfriend, Amanda. His idea was to place a large conch shell onto a quiet area of the beach on Sanibel Island. Inside the shell would be his handwritten proposal note to Amanda. Charles said that Amanda liked conch shells, since she is a science teacher and studied marine biology at the university. This couple was scheduled to arrive from New York, so I searched and found the most attractive conch shell on Sanibel Island.

I suggested to Charles that the beach along the Casa Ybel Resort might be a good location for his surprise engagement on Sanibel. The idea was that I would place the conch shell onto the beach and Charles and Amanda would walk along the beach and see the shell. I advised him not to worry about photographing the surprise engagement because photography on Sanibel Island is easy as the island provides beautiful natural backdrops. I told Charles about the Thistle Lodge Restaurant at Casa Ybel, which would be a great location for their celebration dinner after Amanda said ‘yes’. So the plan was put into action. Charles left the handwritten note at the front desk of the hotel where they were staying. I stopped by the front desk to pickup the note the day before while on another assignment.

Details for a Surprise Engagement on Sanibel

After a few weeks and a dozen emails, text messages and pictures, the day for Amanda’s surprise engagement on Sanibel Island arrived. Charles had a dinner reservation time of 8pm set with the Thistle Lodge Restaurant. So the plan was for the couple to walk along the beach at 7pm and find the conch shell on the beach. I was to be about 30 feet away from conch shell pretending to be photographing birds and shells on the beach.

Last minute change of plans for the surprise engagement

I arrived 30 minutes early and found the perfect spot for the large conch shell. Nearby there were people watching me put the shell into perfect position on the beach. I told them what was about to happen. They offered me one of their beach chairs while waiting. So I sat there talking with the beachgoers while trying to hide my 12 pounds of cameras. While waiting, a few people spotted the huge conch shell. Before they picked it up, I told them, ‘there is a proposal for marriage note in the shell’. They understood and quickly walked away with smiles.

As I was talking with my new friends, I spotted Charles and Amanda in the distance. I prepared the telephoto lens camera as they arrived to the conch shell. Amanda picked up the shell and found the note inside for her surprise engagement. My camera was working in motor drive mode capturing Amanda’s great expressions. Then Charles knelt down on the beach and offered the ring. Well, it is known that a picture speaks a thousand words…we then walked around the beautifully landscaped Casa Ybel Resort for a photo session before this happy couple went into the Thistle Lodge for their celebration dinner. So, what is next? Take a look at my Fort Myers elopement photographer page.

View all posts by Frank Simonetti →